The bailey of the castle at about 10 acres, is reminiscent of the plan of a Roman fort.  There are numerous instances of  a Norman castles  being built  in the corner of an abandoned Roman fort and nearby Cardiff Castle  being a good example.

The site is adjacent to what is believed to be the the Roman road from the fort at Caerleon, the headquarters of the second Augustan Legion, to Neath (Nidum) and beyond. This runs northwards towards Neath, along the course of the road, known locally as Water Street. In  such a rural context, the name  “street” is very often associated with a Roman road (eg Watling Street and Stane Street). From nearby Maudlam Church, the road was thought to run southeasterly along Heol Las. This road is known locally  in English as Blue Street, but could equally well be translated as Green Street, as in Welsh place names such as Brynglas, and this implies that it was once a “green  way” and therefore of some antiquity and was probably the eastward extension of the Roman road.

Between the forts at Cardiff and Neath it should be expected to find two approximately equally spaced intermediate forts, each a day’s march apart. As the crow flies the distance between the Cardiff and Neath  forts is about 58 km. So one would expect a fort at about 20 km west of Cardiff and another at about  20 km further west again. At xx km west of the Cardiff fort is Cowbridge and there is evidence that this was the site of the Roman fort called Bomium built at the crossing of the River Thaw. Going west another  yy km brings us almost exactly to Kenfig Castle, standing at the crossing of the River Kenfig. This appears to provide convincing evidence for the location of one of the missing forts at Kenfig. 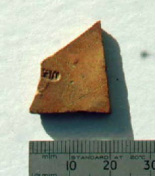 Samian pottery found near castle 1996.
Numerous Roman artefacts have been found on the area. One of the more interesting ones is a piece of Samian pottery discovered during Kenfig Society excavations near the castle. This bears an impressed makers mark, which has been identified by Brenda Dickinson of Leeds University as an early Lezoux piece. All that remains is the following end of an inscription   TEPOMARR , and from this she deduced the following

This is a stamp of Atepomarus ii, who worked at Lezoux, in Central Gaul, in the first century AD. Some of the vessels which he made were Tiberian forms, but one of his stamps, from a different site, occurs on a decorated bowl from Bagington, a site founded in AD 61. This latest example from South Wales, suggests that he was still at work in the later 60's. A span of C AD 35-70, or perhaps 45-65, seems likely for his career, with this vessel belonging to the end of the range.

Emperor Claudius II coin 268-270 BC
Lezoux is very close to the present-day Clermont Ferrand, the Roman town of Augustonemetum. Bagington, is a Roman fort at the southern edge of Coventry (SP3474), which is a long way to the east of Kenfig, and only about 10 miles to the west of Watling Street. This road represents an early boundary between the Romans and the British, hence the early foundation of the fort. Clearly she believes that the Romans did not reach the Kenfig area until the late 60's, which accounts for her suggesting that he must have been active later than was thought.

A Roman coin of the emperor Claudius II has also been found at the excavation. He reigned between 268 and 270 and the coin has been identified as having been minted in Milan . However, the interesting point is that these two artefacts seem to imply a Roman presence lasting over 200 years.

Roman tiles forming part of castle walls
A final piece of evidence is the presence of Roman tiles in parts of the castle walls, notably near the entrance gate. These evidently must have come possibly from a roof of a derelict building which existed near the site of the castle when it was first constructed. Who knows what other remains lie beneath the vast area  of sand dunes surrounding the castle?