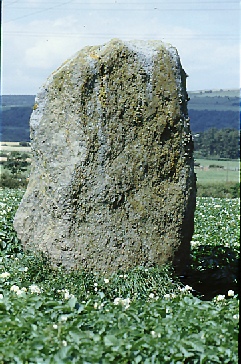 This prehistoric monolith standing alone in a field between Ty'n Cellar Farm and the Motorway is eight foot tall, five and half feet wide, and three feet thick. As is the case with all such stones there has been considerable debate and speculation over its purpose, though the definitive answer has still to be arrived at.   Like many other such stones there is a legend attached to it which claims it goes for a 'drink' once a year.   In this instance the stone is said to travel as far as Sker Point,  perform this remarkable feat and be back as though it had never moved before ****crow on Christmas morning. Dire consequences will befall anybody unlucky enough to meet the stone whilst it is "on the move".

The name of the nearby farm which, taken literally, means "House in the Cellar", is believed to derive from the fact that it in monastic time it belonged to the Cellarer of Margam Abbey. The Maenhir stands in the middle of a field to which there is no public right of access.