KENFIG FOLK the three volume series which charts the history of Kenfig Borough from its founding in 1147 to its demise in 1886. 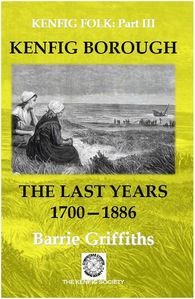 ﻿KENFIG FOLK: Part III KENFIG BOROUGH THE LAST YEARS 1700—1886
​
Kenfig was a straggling village near the sea, beset by sand-dunes and rabbits. The local landlord coveted their properties, but it still had its Charters, Portreeves and Bugesses. Kenfig Borough was still a going concern. This was mainly an agricultural community, but industry especially coal mining was became more important. The railways too, came close by. On nearby Morfa beach there came a sad succession of shipwrecks. Sometimes this was a blessing, sometimes a curse. Wrecks lured scavengers from far and near and this gave the residents of Kenfig a bad name. In the end the strange survival of the Borough could not last. Victorian modernisers brought an end to the independent Borough. Now only a caretaker Trust looks after the remaining assets. Here in Part III of Kenfig Folk we bring our three part story of the Borough through the times of industrialisation up to the point where the Borough was finally wound up.

Price £ 11.95  on Amazon, but Kenfig Society and locals can buy it for £10 here incl p&p!
click on Purchasing Options above

How could the town of Kenfig survive when its people were driven out by the on-rush of sea and sands? That is where we left First Borough of Kenfig, as related in Part I of this series. But Kenfig lived on! It still had its Charter and its Council led by the Portreeve. We can follow their battle to keep the Borough organisation in being, by adapting its institutions to meet their altered circumstances. But the battle against the sand that had claimed their medieval town and castle was far from over. More fields, buildings, and even a small hamlet were lost during these years. Then there were the religious changes spawned by Henry VIII’s break with Rome which split our tiny community to its core with rival groups of Catholics, Nonconformists and Anglicans.
Here in Part II of Kenfig Folk you will meet many of the   people who lived, loved and sometimes thrived          through those turbulent times.
Published 2012, 222 pages ISBN 978-0-9567701-2-7  Price £11.95

In the dunes of Kenfig you will find the forlorn remains of a castle poking out of the sand. This is all that is left of the once thriving town of Kenfig. In this book, the first in the series of Kenfig Folk Barrie Griffiths tells the story of how the town was founded by Anglo-Norman invaders, how it (mostly) withstood the attacks of the local Welsh, and how it was eventually swallowed up by the sand. This book also digs deeper to uncover some of the mysteries buried in the sand: Why did the town and castle of Kenfig become such a focus for Welsh resentment? How did it survive despite being the target of at least nine attacks upon it in less than two centuries? Most important of all perhaps—how, why and when, having survived these repeated attempts to obliterate it, was it subsequently abandoned beneath the sand dunes?
Published 2011, 226 pages. ISBN ​978-0956770103.   Price £11.95
STILL TO COME (as an e-book)
KENFIG FOLK PART IV: THE PEOPLE AND PLACES AROUND KENFIG

Barrie Griffiths unearthed a wealth of detailed information about families such as the Lovelucks, Yorwerths and Loughers and the houses and farms they lived in. This will be of great interest to family historians, and includes many family trees. It is hoped to make this available soon.

About the Author: Barrie Griffiths 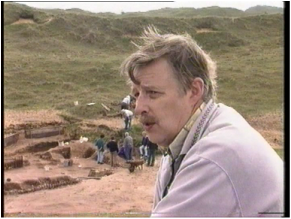 Barrie Griffiths 1942—2009  Barrie was that best of amateur historians — enthusiastic, knowledgeable yet skeptical about what he read and saw. As a retired police-sergeant it came naturally to him to question the evidence, especially the earlier writings of those prone to mystic fantasy. Nor would Barrie accept the confident assertions of ‘experts’. Only by weighing the evidence would he come to a conclusion. In this series of books Barrie lays out the depth of his knowledge and understanding of Kenfig over a period of 700 years, from the coming of the Anglo-Normans to the mid- Victorian era. Barrie, a colourful character in life, wanted to explain Kenfig and its story, but also what was going on in the wider world and how it affected the town. He does this in his own inimitable style, and has produced a highly readable account, which should please both the general reader and the historical specialist alike. Never one to shrink from controversy, after 20 years or more of close examination and reflection on the evidence, Barrie was able to form many new insights and interpretations, which will be found in these pages. But this is not done in a rancorous way — reasonableness and good humour shine out from Barrie’s account of the life of Kenfig Folk.
link to 'Time Trekker' Barrie's memorial website