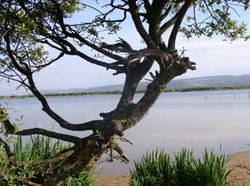 Encompassing nearly seventy acres, Kenfig Pool is now the centrepiece of The Kenfig Nature Reserve and home to a large variety of resident and migratory waterfowl.   It is one of those places where myth, legend, and fact combine.   Local lore claims that it is fed by seven underground springs, is bottomless, and contains a whirlpool that will suck the unwary to their death.  In fact the maximum depth is about 12 ½ feet, and it is the thick weed that grows on the bottom which probably trapped those that have lost their lives in its waters.

An old story (surprisingly still widely believed) claims that its waters hide the remains of a lost city.   There are several versions of this legend which was apparently current as far back as the 16th century.The one generally told is how a young man of the town, his advance’s to the daughter of its lord rejected because he was so poor, went out and murdered her father’s steward when he was returning with the rents collected from the tenants. The money he stole won the lady’s heart, but at the marriage feast a spectral voice warned that vengeance would ultimately be visited upon them and their descendants in the seventh generation.

The couple lived until, indeed, a child was born that was the seventh generation of their descendants who, by this time, virtually formed the entire population of the city. On that day it was visited by a strange young man who, having roamed its streets, left as dusk fell.   He was the descendant of the murdered steward, and that night the disembodied voice was again heard crying that vengeance was now come.   With a mighty roar the entire town vanished, leaving the quiet water of the pool in its place. It is said that sometimes the bell of its church can be heard tolling beneath the waters, a sure sign of stormy weather, as are the three ‘Devil’s Chimneys’ that are claimed to occasionally poke above the surface belching out sulphurous fumes! These, and many other tales, have attached themselves to this tranquil spot over the years, but the factual history of the pool itself is no less interesting. It came into being when the drainage of the area was blocked by the formation of the coastal dune system in prehistoric times. Today there is no visible outlet to the pool, but when the town of Kenfig was founded in the mid 12th century a stream called the Blaklaak flowed northwards into Kenfig river and formed the borough’s western boundary. This vanished beneath the advance of the dunes, and a map of 1592 shows that by then the pent-up waters of the lake had forced a more direct route westward to the sea.

There is a record of poachers being prosecuted for taking fish from the pool in 1365 at which time the monks of Margam Abbey apparently held the fishing rights. Following the extension of borough boundaries in the 15th century these were apparently transferred to the burgesses as stated in a survey of the manor made in 1660.   At this time the only fish it contained were eels and roaches.   A century later Thomas Mansel Talbot of Margam, who had enjoyed fishing and wild fowling here as a boy, paid for pike to be brought from Llangorse Lake near Brecon in specially constructed tin containers to stock the pool. Perch were also brought from the fishponds at Hensol Castle, and the Talbots arrogated the hunting and fishing rights to themselves.

Over the next century they gradually developed the pool’s amenities, building a boathouse (the ruins of which are still visible near the western shore), and an artificial island for wildfowl to nest undisturbed. This last has now subsided beneath the waters.   The Mansels also planted the willows that now fringe the banks, and probably the reed beds as well. Whether they introduced swans to the lake, or whether these arrived naturally is not known, but the estate certainly paid a local farmer to ensure these birds were fed with barley during the winter months.

Most of these improvements were put in place to ensure a healthy wildfowl population that could be shot for sport, but today they provide a haven for a large variety of birds (including on one occasion a flamingo!) that draw bird spotting enthusiasts to Kenfig from across the entire country.