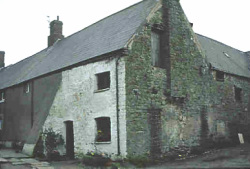 Although not (as is sometimes claimed) a grange of Margam Abbey, Marlas is nevertheless one of the oldest farms within the boundaries of the former Borough of Kenfig.   As ‘La Marle’ it is mentioned in a document of 1264 at which time it was probably the home of the Grammas family.

In 1344 a William de Marle admitted that he had wrongfully claimed ownership of some pastureland on St Michael’s Grange (Llanmihangel) that he had been renting from the monks.   The reason (as he put it) was that he had gone ‘funny in the head’!

On architectural grounds the present house has been dated to about 1600, and is of such size that it has now been adapted to form two dwellings.   It was probably constructed by the Thomas family of Ynysarwed in the Vale of

Neath who were the owners from 1543.   In the 1640s the house was bought by the Margam estate and on two subsequent occasions (1646 and 1686) was considered grand enough to become the temporary home for sons of the Mansel family following their marriage.

In the latter half of the 18th century the farmhouse was the home of the well-to-do Jenkins family who owned property in the Avan valley and in the boomtown of Merthyr Tydfil.   The last member of the family to live here was an elderly spinster named Mary who seems to have allowed the property to run down somewhat, so the Margam estate bribed her to surrender her lease in return for an annual annuity.  Part of the building was afterwards turned into a commercial brewery that remained in production for several years.   The present occupants are the Morgan family who have farmed here since the 1840s.