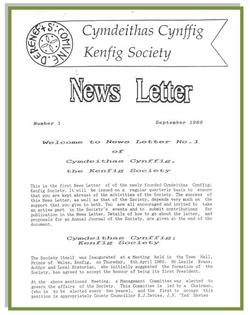 On the right you can see a facsimile of the very first Newsletter of the Kenfig Society. (full text below)

At the end of this historic first Newsletter is a LIST of (nearly) all the other newsletters and Guide Notes for visits, produced for many years by Keith Morgan, then Terry Robbins and Linda Knight (all now sadly deceased)

The list includes brief details of the contents, as well as the date.

If you want a copy of any Newsletter please contact the Society using the Contact Form above. There may be a small charge, but it will be free to Members.

The Society itself was Inaugurated at a Meeting held in the Town Hall, Prince of Wales, Kenfig, on Thursday, 6th.April 1989. Mr  Leslie Evans, Author and Local Historian, who initially suggested the formation of the Society, has agreed to accept the honour of being its first President.

At the above mentioned Meeting, a Management Committee was elected to govern the affairs of the Society. This Committee is led by a Chairman, (who is to be elected every two years), and the first to occupy this position is appropriately County Councillor E J Davies, J.P. "Ted" Davies is well known for the active part that he played as a Member of the Kenfig Trustees, in helping to preserve the Kenfig area for both the Nation and for posterity- The Honorary General Secretary is Mr  Haydn Reynolds, who also happens to be the Secretary of the Kenfig Trustees. He has an able Assistant Secretary, Mr  Dennis Jones. The Honorary Treasurer and Membership Officer is Mr  Steve :Moon, the Warden of the Kenfig Nature Reserve. His Assistant is Mrs  Yvonne Carr. The Honorary Editor is Mr Keith E Morgan. The latter also acts as both Information and Photographic Officer. Other Co-opted Members of the Committee are Mr Haydn David, Mr Barrie Griffiths, Mr Bill Halley, Mr Peter Jones, Mrs Sharon & Mrs Steve Knapp, and Mr John Marke.

Aim of the Society
The Main Aim of the Society is to promote and encourage interest in the Kenfig Area. This is intended to cover a range of subjects which include Local History, Archaeology, Human History, Botany, Ornithology, General Natural History, Practical Conservation, Dragonflies, etc. A working relationship has already been set up with the Kenfig National Nature Reserve and close liaisons are to be established with other organisations such as CADW, the Glamorgan-Gwent Archaeological Trust, Community, Borough and County Councils Councils on preservation and other work to be carried out in the area, e.g., Kenfig Castle and Sker House.

It is expressly pointed out that Cymdeithas Cynffig; the Kenfig Society is a non-political independent society.
Regular meetings of the Society are to be arranged for lectures, displays, discussions, slide presentations, etc. These will be held in the Old Town Hall (or Old Guild Hall) above the Prince of Wales, Kenfig. It is planned that outside practical activities will also play a large part in the Kenfig Society's programme of events.

Society Membership
Membership of the Society is open to anyone interested in applying to join, everyone. The response has been quite encouraging and since the Society's inauguration in April, 77 people have been accepted as Members.
--Four levels of Membership Fee have been set: Full Membership £5.00; Family Membership £7.00: Child Membership £2.00 and Reduced Membership £2.00. The latter is intended to apply for Senior Citizens and the unemployed. The period of Membership will run annually from 1st  April each year.
--For those wishing to apply for Membership, Forms have been included at the end of this News Letter. The completed application Forms, together with your remittance, can either handed in to Mr Steve Moon at the National Nature Reserve Centre at Kenfig, or given or sent direct to Mrs Yvonne Carr at the address given. Please do not forget to let us know what your Special Interests are.
The Society 'logo'
The new Society has a "Logo" which is based on the Ancient Seal of Kenfig. There are two forms of this "Logo"; the Flag type which appears at the top of the first page of this News Letter and the circular version, an example of which is given opposite. You will see both forms of the "Logo" used on the various notices and publications produced by the Society. A word of explanation on the Kenfig Seal. This particular Seal has been use since 16— and the lettering round the edge states
COMVNE = DE KENEF'+S':
In the medieval period, "V" was used for a "U". The on the Seal could have been intended to be an "I" whilst what looks like an "S" was probably meant to be a "G". Mr  Barrie Griffiths has advised us that the translation of the lettering simply means:-
The Community or Borough of Kenfig
Projects
A number of Projects have been set up and some of these are already well underway.
--A survey of all the Grave Stones in Maudlam Churchyard has already been completed and a record is being produced. The Project Team, consisting of Mrs Yvonne Carr, Mr Barrie Griffiths and Mr Dennis Jones, are now researching all the Parish Records (Baptisms and Burials) that are stored in the Archives of the Glamorgan County Records Office at Swansea.
--A List of all the Ship-Wrecks around our local coast line has been compiled by Mrs Yvonne Carr and will form the subject of one of our forthcoming Slide Presentations.
--Surveys have already been carried out on the Castle and neighbouring area and these will be reported on in due course. A Sub-Committee, under the Chairmanship of Mr Haydn David, is producing a Guide Booklet on the local area of Kenfig. It is hoped to launch this document at a Social Evening of the Society before Christmas.
--In addition, we have those associated projects which form the actual day-to-day running and responsibility of the National Nature Reserve under the guidance of Mr Steve Moon.
Programme of Events
A number of events have already taken place. With the aid of a very comprehensive set of slides, County Councillor Ted Davies, at the Society's inaugural lecture, set our presentation standards at the highest of levels. He eloquently conducted us on a very interesting and informative "Walk around the Ancient Borough of Kenfig" and left us all feeling justly proud of the heritage preserved around us. This was followed by a short address by the Editor who again used slides to throw some very interesting and controversial theories on the origins of Kenfig at the audience. Barrie Griffiths' enthralling talk and slide presentation on "The Stormy Landscape", made us all sit up and take note. With this excellent grounding in field work, not any of us who attended the meeting will be able to walk around the countryside now without recognising the history that has been written into its surface and features.
It is the Society's intention to maintain this high level of interest, and the following events have been arranged accordingly:-

The following event, although not associated with the Society, is brought to your attention for those who are interested in Local History:-
'A Photographic History of Kenfig Hill & District"
An Exhibition of Photographs will be held in Pyle Library from Saturday, 7th.October 1989 to Tuesday, 31st.October 1989. The Exhibition will be concluded with a Slide Presentation at 7.00 pm, on Tuesday, 31st.October 1989
Records
The Editor is currently setting up a System of Records for the Society. These Records will embrace Photographs and Slides; Documents and Articles of Interest; Tape Recordings of Society Lectures, etc. The Society has already received a fair number of contributions comprising documents, maps, articles and photographs. Those wishing to follow suit, might like to contact the Editor to discuss the arrangements that can be made for the copying of original documents and photographs for lodging in the Society's Records.
Kenfig National Nature Reserve
Congratulations to the Nature Reserve on attaining National Status. It is important that we give Mr  Steve Moon our support and every opportunity to bring the work of the National Nature Reserve to the attention of everyone. To this end, we have included his own letter and message at the end of this News Letter.
News Letter & Journal
In addition to printing a News Letter on a quarterly basis, it is intended to produce an Annual Journal of the Kenfig Society. It is envisaged that this will be available for the Annual General Meeting to be held in April each year. Everyone is encouraged to submit articles to the Editor for both these publications: short for the News Letter; longer ones for the Journal. A number of articles have already been received and these will be included in the next issue of the News Sheet. Articles of interest are also in preparation for Journal.