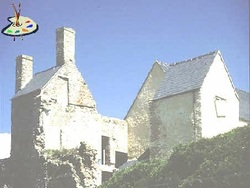 Sker House can justifiably claim to be probably the oldest building in the district that is still in use.  Its origins lie in the late 12th century when the first buildings were erected here as a grange or farm of Neath Abbey.   Elements of this early building that housed the lay brethren who worked the land in the adjoining fields still exist within the fabric of the present structure, and the adjoining barn known as Ty’r Ychan (‘The Ox House’) is also believed to date from this period.

Following the dissolution of the monastery it was acquired by the Turberville family of Penlline.  They used it as a convenient estate to house and support junior members of the family, the most notable being Jenkin Turberville who lived here for a decade or more after 1561.The Turbervilles were staunch Roman Catholics, and as persecution of the adherents of the ‘old religion’ increased during the reign of the first Queen Elizabeth, the isolated house became a convenient refuge for fugitive priests and for holding clandestine services.

When Jenkin succeeded his father at Penlline prior to 1575 he spent considerable sums of money having the former grange renovated and enlarged to create the house we see today.  He died in 1597 as a result (so it is believed) of rigorous questioning and torture following the discovery of evidence that he had been harbouring Jesuit priests and promoting Catholicism in Glamorgan.  Despite this, his descendants remained loyal to their faith, and in 1578 Father Phillip Evans, a Jesuit priest, was arrested at Sker and subsequently hung, drawn and quartered after a mockery of a trial at Cardiff. The occupant of the house then was Christopher Turberville who, in the face of increasing persecution for his faith, finally sold the property and sought exile abroad in 1697.

The Sker estate then passed into the hands of absentee landlords and their tenant farmers.  Perhaps the most famous of these was Isaac Williams (1727-1766) whose daughter, Elizabeth, passed into legend as “The Maid of Sker”.  How much truth there is in this old tale is, and probably always will be, a matter of speculation.  It is claimed that she fell in love with a local carpenter and harpist from Nottage named Thomas Evan who composed the song ‘Y Ferch o’r Sker’ in her honour.  Her father, however, forbade the match, and having kept Elizabeth imprisoned in the house forced her to marry a Thomas Kirkhouse.

Although the couple had four children, it is claimed to have been a loveless union.  To her husband’s fury, every time Thomas Evans was in the vicinity of their home at Briton Ferry Elizabeth would slip out of the house to hear him play, begging him to perform ‘her song’.  She died in 1776 after nine years of marriage, and lies buried at Llansamlet.  It is only justice to say that descendants claim the story to be a fabrication and that the marriage, although short, was a happy one.

The Victorian novelist R.D. Blackmore, best known for his novel ‘Lorna Doone’, spent much of his childhood at nearby Nottage Court and knew Sker well.  Less well known is the fact that he subsequently wrote a novel called ‘The Maid of Sker’ which he felt was the better work, though this was neither the view of contemporary or latter-day critics. Whilst set at Sker, the story it relates has no connection with the one of legend.

Another less well-known ‘Maid of Sker’ lived here at the end of the 18th century.   She was Martha, the daughter of Morgan Howells who farmed Sker from about 1772 until about 1797.  Her’s is a happier tale than Elizabeth’s for, having fallen in love with a labourer named William David, the couple engineered a successful elopement and, despite being pursued by her father as far as Bristol, were married at St James’ church, Bath, in 1793.

Neglected by both landlord and tenants the gaunt, grey, historic old house gradually slipped into decay, and was finally abandoned to fall into ruin.  Happily this was prevented at the eleventh hour by the intervention of an historic buildings trust who (at the time of writing) are in the process of returning it to the condition it was during the heyday of the Turbervilles.     Once renovation is completed the building will be sold on the condition that it is opened to the public on a specified number of days in the year.

Fuller details of the history of the house, and the stories of the three ‘Maids of Sker’ can be found in the Kenfig Society booklet ‘The House at Sker Point’ by Barrie Griffiths, available at the Kenfig National Nature Reserve, price £1.50.