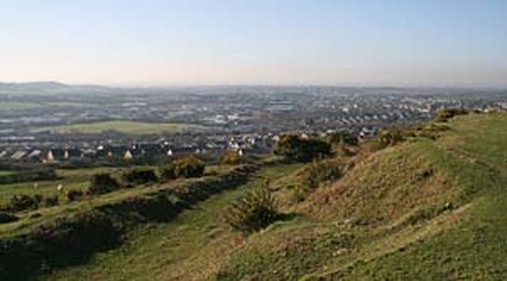 “The Danes Vale” viewed from the ramparts of the prehistoric fortress at Pencastell on Cefn Cribwr ridge.
No physical remains or artifacts have so far been discovered to indicate a Viking settlement at Kenfig.   The now vanished earthworks of the so-called “Danish Camp” on Stormy Down were almost certainly those of a cattle corral dating to the Early Bronze Age and was therefore an ancient site even before they began their raids.   Likewise the claim that Vikings attacked and burnt Kenfig in 893 AD has no basis in fact since the chronicle in which it is recorded – The Book of Aberpergwm – is now known to be a forgery created some 200 years ago.

There is, nevertheless, a strong body of evidence in the form of local place-names to suggest that Vikings did settle here in the 10th century.   Currently it is the fashion to interpret the name “Sker” (applied to a rocky promontory on the coast between Kenfig and Porthcawl) as being derived from the Welsh word “Ysgair” which means “an abrupt rise in the land”.   This, however completely ignores the fact that the earliest recorded form of the name (in the 12th century) is “Blakescerra” or similar.   This is quite evidently of Scandinavian origin and means “the Black Reef” - an eloquent description of the rocks of Sker Point upon which so many ships have foundered down the centuries.

A small but significant group of fields retained names of Scandinavian origin well into the 17th century.   “Hernes” means “a corner” or “an angle” and was applied to fields at both South Cornelly and Haregrove (near Kenfig Hill).   “Gnap”, occurs as an element in the names of a group of fields on the north side of the lower reaches of Kenfig River (on the site of the later Newlands Colliery).   It means “bowl shaped” and (depending on whether the “bowl” was upright or upside down!) was applied to both hillocks and hollows in the landscape.   It also forms an element in the name “Alweiscnappe” applied to a hill on the border of the Manor of Newton (Porthcawl) in the 12th century.

Perhaps, however, the most significant evidence (again from 12th century documents) is the mention of “The Danes’ Vale” applied to the marshy valley between Stormy Down and Kenfig Hill now largely drained and the site of the local comprehensive school and Pyle’s Village Farm Estate.

As well as place and field names there were, in the 12th century, several local individuals bore distinctly Scandinavian names – Gistelard, Gunnilda and Jorverth for example.   The descendants of the last named were the Yorwerths or Yoraths (there are several different spellings) who were quite numerous in the district in the 18th and 19th centuries.